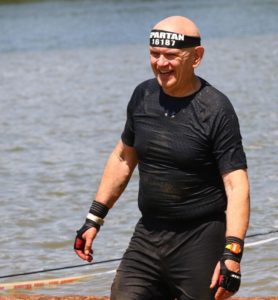 Congrats Dad!  You DID it!  As of today, you are OFFICIALLY RETIRED!  Enjoy your ‘back-slaps’ and ‘congrats’ from your fellow workers because you have earned it. . .and revel in the knowledge that while everyone else has a 3 day weekend, YOU have all of next week off!  And the week after that, and the week after that, etc.  You’re 68. . .you’ve earned your rest.  But will you take it?  I doubt it!  🙂

Growing up, I never thought of my Dad as being ‘overweight’. . .but I think he did.  He was on his High School wrestling team so I know he was athletic in his youth. . .but like so many people, once he ‘graduated’ into the ‘real-world’ he stopped being as active.  Life happened.

In early 2012, at the age of 62, he did something I would never have EVER thought he’d do. . .he took up running.  In just 4 months he lost 60 lbs!  He loved the results he got so much that he kept running. . .not only was he in better shape physically, but he seemed happier also.  His transformation was inspirational!  Because I saw that he could take back control of his health at the age of 62 I realized I had NO excuse at the age of 38.  I had felt that time had passed me by. . .but my Dad’s example inspired me and in 2013 I began to run too.

The passion for running and fitness grew in both of us.  We’ve always had a good relationship but we were closer now. . .we competed with each other to see who could log the most miles per month.  In December of 2016 I ran in my first Spartan Race and loved it!  I started signing up for more Spartan events and my love for them must have made my Dad curious because in 2017 at the age of 67 he joined me and ran his first Spartan Sprint at Perfect North Slopes, IN.

The Sandbag Carry was BRUTAL!

We all finished! (left to right) Me, my 15-year-old son, my Sister, my Brother-In-Law, and my Dad

Actually, I also talked my Sister, Brother-In-Law, and 15-year-old son into it also. . .I wasn’t sure if they were going to talk to me afterward or not, but we all had fun so it worked out!  🙂

Not only did he finish that event, but he loved it enough that he flew out later that year to join me for the Spartan Sprint in Castaic, CA!  Again, he did great and finished strong.

I love this look of determination!

Water was actually a bit chilly. . .

But he wasn’t done yet.  Before he had even flown back home he was talking about MAYBE going for his TriFecta (completing a Spartan Sprint, Super, and Beast all in one calendar year). . .and by maybe I knew he DEFINITELY wanted to do it but wasn’t yet sure he could commit to it.  Well, after thinking about it over the next month he decided a 2018 Spartan TriFecta sounded like a good challenge.  He is well aware of his age and knows that he feels good now but doesn’t want to gamble on the future. . .so he’s ‘seizing the day’ and going for it while he feels he can!  He did his Sprint earlier this year by going back to Perfect North Slopes, IN. . .now he faces his next challenge in less than a month. . .his first ever Spartan Super (8-10 miles, 24-29 obstacles)!  In November, at the age of 69, my Dad will be earning the final piece of his TriFecta. . .the Spartan Beast (12-14 miles, 30-35 obstacles!)  I am happy to say that I’ll be able to join him for both his Super and his Beast. . .to encourage him, to struggle with him, and to celebrate his victory!

So I hope you have a great last day at work Dad. . .enjoy your retirement!  Know that you’ve earned your ‘rest’. . .and know that you’re an inspiration!  For the rest of you. . .my Dad’s going after his 1st ever Spartan TriFecta at the age of 69. . .what are you doing?