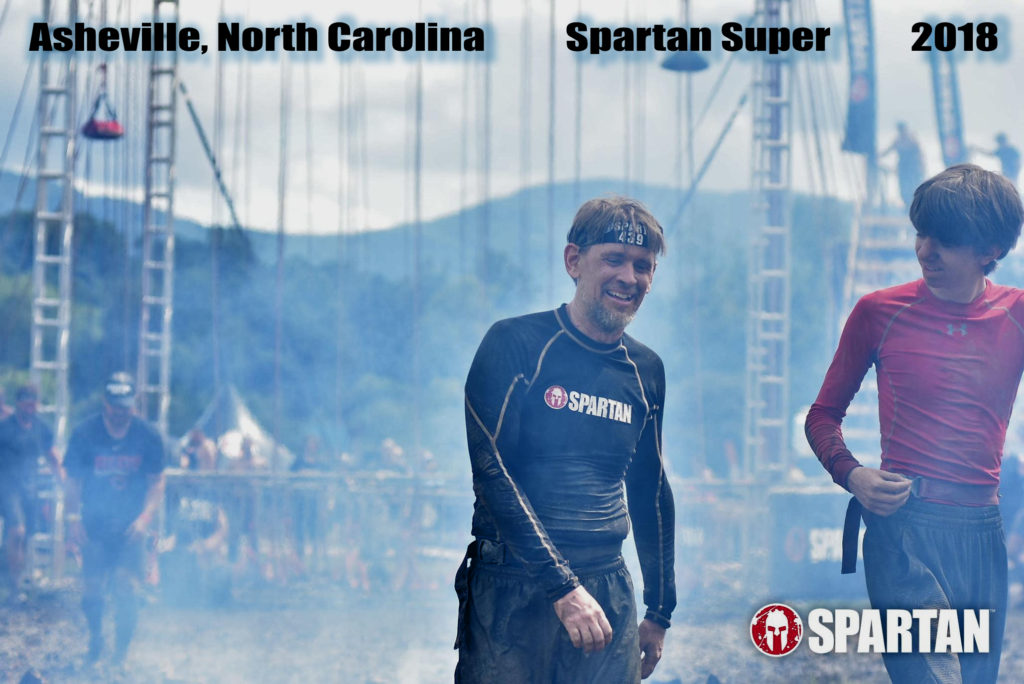 The venue was actually just to the east of Asheville in the city of Black Mountain and it had been POURING down rain the entire week leading up to the event. . .it had been raining so hard that there had been reports of flooding 2 days prior. . .on Friday Spartan sent out an email saying that due to the rain they were having to make a few last-minute changes to the course since parts of it were no longer passable!  They promised to do what they could to re-route the course and keep as many of the obstacles as they possibly could. . .but we would want to arrive in 4wd vehicles if at all possible to avoid getting stuck in the parking lots!  Well, when my 16-year-old son came to me earlier this year and said he wanted to go for his first TriFecta this year and I committed to help him achieve it. . .we had made the Asheville Super our ‘stop number 2’. . .so we borrowed my Brother-In-Law’s brand new 4wd truck (Thanks Jessie!) and set off for the muddy unknown! 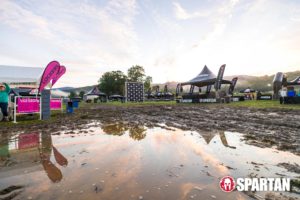 I’ve never seen so much mud!

When we got there we found the entire festival ground was covered in ankle-deep mud and clay!  We wisely decided to change into our running shoes while still in the truck so we could keep our normal shoes nice and mud-free!  By the time we finished getting registered, bought our Venue Shirts, dropped off our bag and made our way to the starting line we could no longer even SEE what shoes we were wearing. . .it just looked like we had strapped blocks of muddy-clay to our feet!

The map showed a course of just over 8 miles. . .but as we were told by the official race starter. . .”All the veteran runners know that Spartan’s suck at math!  So just round-up!”  I clocked the course with my Garmin Forerunner 920XT at just over 9 miles. . .probably due in part to any last-minute rerouting they had to do. . .but what an epic 9 miles it was! 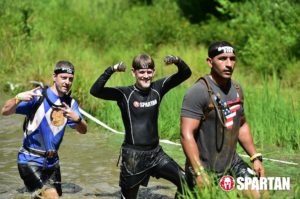 The river sections were actually a very welcome change from all the mud!

It was over a mile before the first obstacle. . .but a large part of that first mile was a long trudge up thru an engorged river!  When you weren’t in the river you were sludging your way thru mud. . .and just when you were sure to have absolutely zero dry patches on your body Spartan was happy to start introducing you to obstacles!  🙂  The Vertical Cargo and Hurdle 1 were fairly standard ‘up-and-over’ obstacles. . .but the conditions of the course started to come into play fairly quickly. . .since everywhere you went you were in mud and clay there was absolutely nowhere to dry your hands.  Since CLAY was mixed in with the mud there was no way to get any real grip on anything.  This actually helped in some degree when we got to the Plate Drag.  For the Plate Drag you have to pull a metal sled that is weighed down with sand bags toward you using a rope that is attached to it. . .once you’ve pulled it all the way across its path toward you (about 10 yards) you then grab the short chain on the other side of it to drag it back out for the next guy.  The rope was very slick, of course, so I used a technique where I create a loop in the rope and pull with my hands inside the loop for extra friction. . .once I go the plate moving I found that the clay mixed in with the mud actually seemed to let the plate slide a little easier. . .LITTLE easier!

Next up were the 6 foot and 8 foot walls which we both scaled without much problem. . .it’s always nice to get the 8 foot wall earlier in the course before your calves are threatening to cramp up on you!

The Z-Walls were where we encountered our first (yes, first) set of penalty burpees!  They were set in the middle of a bog. . .it actually looked pretty cool since you came out of a forested trail into a clearing that had about a foot of water covering it. . .and standing in the middle were the Z-Walls!  Well, obviously the foot pegs were soaked and the hand grips were not only soaked but coated with mud so getting any kind of grip was VERY tough!  Both my son and I came off the wall during the ‘blind-turn’ and ended up doing 30 burpees in the muddy bog!  But not to worry because the Multi-Rig was up next. . .as was our NEXT set of 30 burpees for failing it as well!  🙂  I’d like to just point out that the burpee zones were fairly packed on this course!

The fog layer added a VERY cool effect to the venue.

We bounced back to conquer the Inverted Wall, Rope Climb, Tire Flip, Rolling Mud/Dunk Wall, Slip Wall and Olympus along with several miles of steep muddy climbs followed by steeper muddier descents. . .and several more river crossings of course!  Having several obstacle victories under our belts we came up to our next impassable obstacle. . .the Monkey Bars.  Now, normally I don’t have any problem with the Monkey Bars, but normally my hands aren’t slicked down with clay and mud while trying to hold onto slick-wet metal bars. . .so yes, we both joined in on the fun everyone else seemed to be having and did 30 more burpees here!  🙂 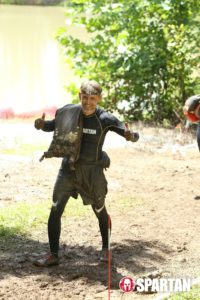 Next up was the first heavy carry of the day. . .the Sandbag carry.  It actually wasn’t all that bad. . .I’ve had a lot worse carries on other courses. . .and since I HAD BEEN envisioning slipping and falling the entire time I was trying to carry it. . .I was actually pleasantly surprised to find that for the MOST part the carry was on fairly even ground!  There was one part where you had to pretty much slide on your butt down a descent. . .but that was actually kind of fun!  I think the bag only weighed around 70 lbs total, so a little on the lighter side also.  I am NOT complaining here!  🙂

After a short distance with the Sandbag we moved on to Hurdle 2 followed by Bender.  This was my sons first time seeing Bender so I coached him thru it.  It can be a bit of a mental challenge at first but he handled it well and completed it!  If you don’t know what it is, it’s a series of horizontal metal pipes that start at about 6 feet off the ground and curve back and over your head. . .there is about a foot gap between each pipe and at the top it’s probably around 12 feet tall?  I’m guessing here. . .anyway. . .the hard part is that you are climbing up a ‘wall’ of pipes that curves back and over you so you end up somewhat upside-down near the top where you have to pull yourself over and then back down the other side.  I may not be describing it that well. . .just know that it was challenging and I’m proud of my son for completing it!  🙂 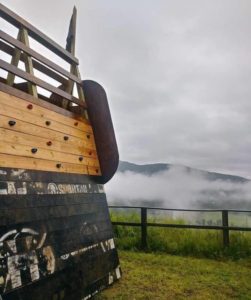 After another short trail section we came to a small clearing along a cliff side that treated us to both a beautiful view AND the chance to be among the first ever Spartan Racers to attack the Great Wall. . .a brand new obstacle being introduced for the first time ever on a Spartan Course!  I really liked this obstacle. . .not because I was GREAT at it or anything. . .I DID successfully complete the obstacle, but it wasn’t exactly easy for me!  The challenge was to be able to pull yourself up the wall using the rock-climbing hand grips far enough that you could get a foot on the lower hand grips. . .once you did that then the rest was easy!  But with the hand grips being slick with (you guessed it) mud and clay it made it extra challenging to feel like you could pull your weight up the wall without your hands slipping off the grips. . .however after a few efforts of pulling myself up and narrowly avoiding slipping back down I managed to get up high enough that I was standing on the lowest hand holds and let out a pent-up ‘Aroo’!  I got to say, it felt really good to have finished this obstacle!  It’s always fun to come across a new challenge on the course and be able to complete it!  I hope to see this one on more courses in the near future.

Another trail section led us to The Armer (think Atlas Ball with a short chain) and then our next set of 30 burpees. . .the dreaded Twister.  This obstacle is the bane of my existence!  Not only have a never successfully completed the Twister. . .I’ve never even come close!  I keep trying to work on my grip strength but it seems that this obstacle continually has my number. . .when the day comes that I finally crack the code on this one I’m going to feel absolutely invincible! 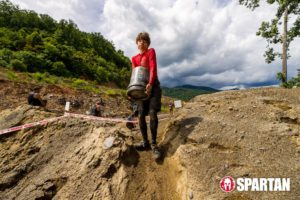 My 16-year-old son HATES the Bucket Brigade. . .it weighs about half his body weight!

More trail in and out of forest. . .up and down muddy hills. . .across and thru rivers we went stopping along the way to conquer the A-Frame Cargo, Atlas Carry, 7 foot Wall, Bucket Brigade, and Barbwire Crawl (which I got my hair stuck in while rolling. . .guess I need a haircut?) 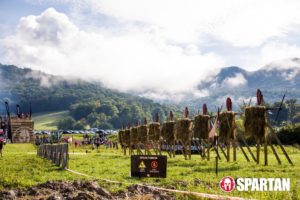 This led us to the Spear Throw and our final set of penalty burpees!  I don’t think it matters how much I read about different techniques on this one. . .I hear some people say that it’s pretty much a 50/50 chance if you’re going to make it or not, but in my experience I’ve only made it 2x out of the 11 races I’ve completed, so there’s a greater chance of me missing than making it right now!  I HOPE to change that soon!  🙂  But at this point in the race we were in the final gauntlet of obstacles and could literally see the finish line so we finished out our burpees in good spirits knowing that there wasn’t much else between us and our well-earned finisher’s medals! 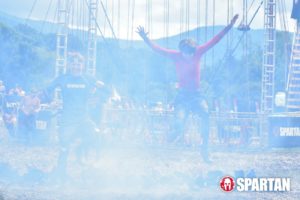 One final leap over the fire and we are done!

We made quick work of the Connex Bridge and the Hercules Hoist before leaping across the Fire Jump and earning our right to leave the course having successfully earned our finishers medal and shirts. . .but most importantly. . .having earned the shiny blue triangle piece to my sons first ever Spartan TriFecta!  Two pieces earned. . .one left to go!  It took us 5 hours and 8 minutes to complete this one, but complete it we did!  I think I’d have to say that this venue has become my favorite so far and if you ever get the chance and are up for a good challenge. . .this is definitely a course that I would highly recommend!  Just make sure to bring a good attitude and a GREAT pair of OCR shoes!  Traction is a MUST for your feet on this course!  Be ready to encounter a lot of mud and water. . .but also great people, awesome scenery, and the chance to create some really spectacular memories!  Aroo! 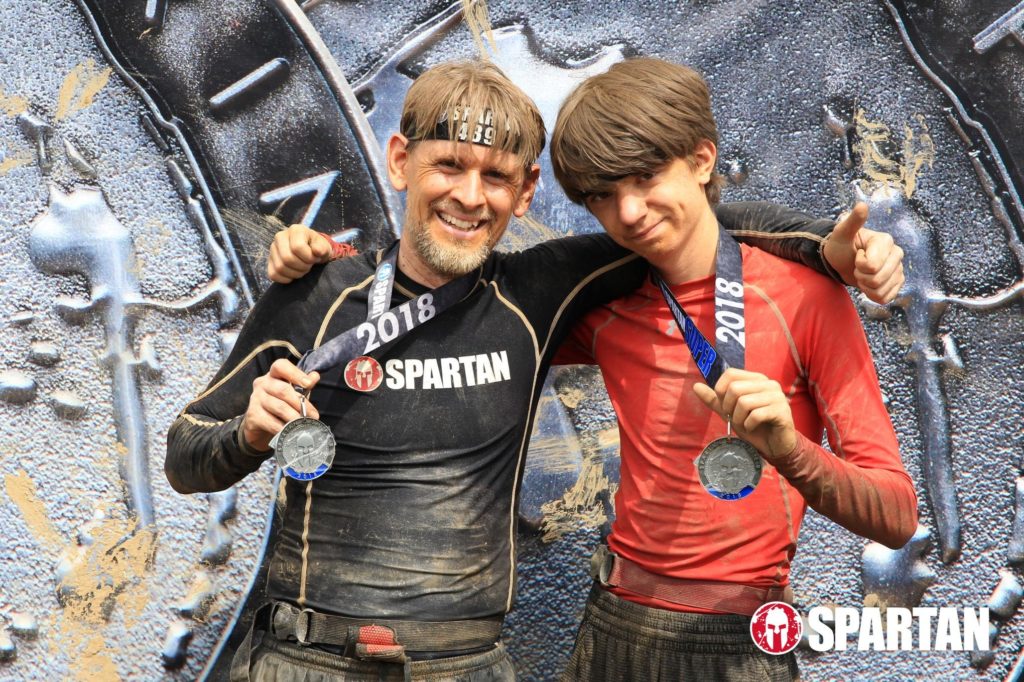 For finishing this event, every participant received a Finisher Shirt, Finisher Medal, and Super TriFecta Wedge.  For an additional $30 you could buy the limited edition Venue Shirt, which I did! 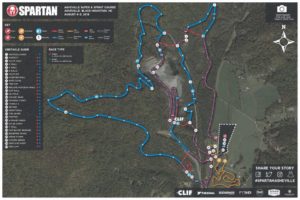